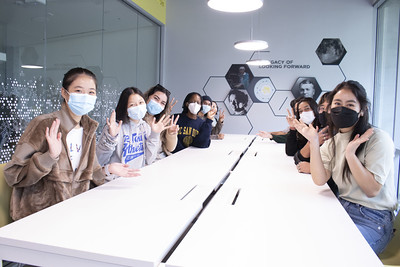 The School of Physical Sciences Cohort Program, a new and exciting opportunity for students in Chemistry & Biochemistry, Mathematics, and Physics to work together as a community to build foundational knowledge and launch meaningful and significant careers in STEM.

This program consists of the following major components:

Chemistry is the study of matter and energy, and their respective properties. In general, chemistry provides a lens to understanding the universe. The CHEM 6 series is intended for science and engineering majors.

Physics Seminar: Life, the Universe, and Everything - an invitation to Physics

Physics is crucial to understanding the world around us, the world inside us, and the world beyond us. It is the most basic and fundamental science. Physicists are problem solvers. In this course, you will learn how to use mathematics and physics to describe systems, build models of their behavior, and solve problems in a way that will help you succeed in courses in engineering, mathematics, physics, chemistry - especially in PHYS 2A and 4A.

Application and Due Dates